Today’s post comes from Anna Lewis, social media intern in the Education and Public Programs division, based on the DocsTeach descriptions and activity created by Annie Davis, education specialist at the National Archives at Boston.

We recently uploaded documents from our holdings at the National Archives (from the Records of District Courts of the United States) to DocsTeach to star in a new activity: Oh Freedom!

Students can learn the personal story of two individuals—William and Ellen Craft—and recognize the aid provided to fugitive slaves and the challenges they faced even after making it to free states such as Massachusetts.

William (1824-1900) and Ellen Craft (1826-1891) were enslaved people who escaped from their respective masters in Macon, GA, in December of 1848. Ellen, the daughter of an African-American woman and a White master, passed as a White gentleman accompanied by a slave valet, William. They made their way to Boston, MA.

Attorney Willis H. Hughes filed this complaint against Ellen Craft, and another against William Craft, on behalf of their former owners in Macon, Georgia.

Because of the passage of the Fugitive Slave Act of 1850—part of the Compromise of 1850—law enforcement in non-slave states had an obligation to apprehend escaped slaves, including the Crafts.

A civil case began in 1850 concerning their escape from slavery. A man named John Knight swore in affidavits that he knew William Craft as Ira H. Taylor’s slave (shown here) and Ellen Craft as Robert Collins’s slave in Georgia. The Massachusetts law enforcement and courts would have to send William and Ellen back to Macon.

The court issued this warrant to find and capture William Craft, a “fugitive from labor,” with the intention of returning him to Georgia. The Census of 1850 shows the Crafts living in freedom at the home of Lewis Hayden in Massachusetts.

In 1850, a deputy U.S. Marshall sought them out at Hayden’s home, but Hayden denied that they were there and threatened violence, such that the U.S. Marshall departed.

According to this warrant issued following this incident, “the complaintant [in the case] didn’t want the [original] warrant returned as he was “informed that the said Crafts [were still] in…this city.” However, within a few weeks the U.S. Marshall of Massachusetts reported: “I have made diligent search for…William Craft, and cannot find him…” 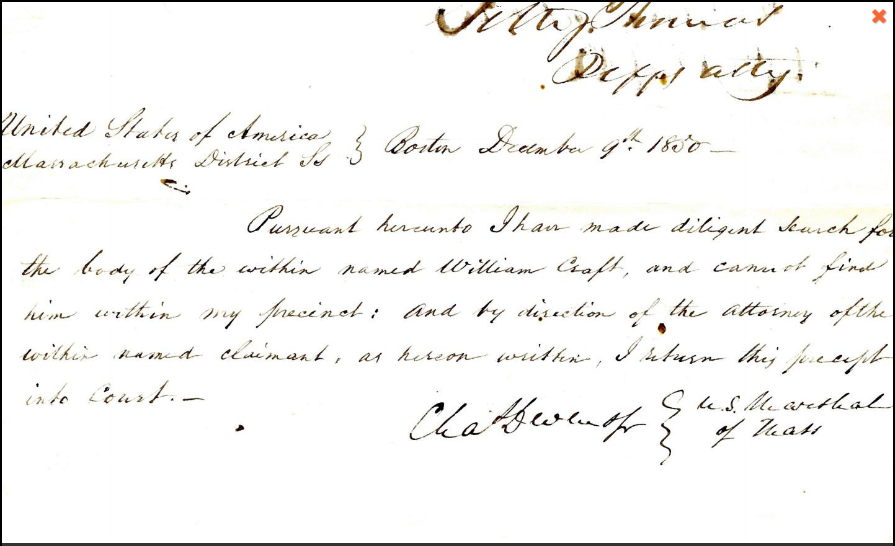 The Crafts fled to Britain, where they lived for 20 years, raising their family, lecturing about the freedom movement, and writing their memoir Running a Thousand Miles for Freedom (1860) (available online from Documenting the American South (DocSouth)). They later returned to the United States and settled in Georgia.

4 thoughts on “Oh Freedom! William and Ellen Craft’s Escape from Slavery and Continued Search for Freedom”