In this activity, students can analyze a Government poster used to recruit recently freed slaves to fight for the Union Army during the Civil War. The poster refers to the Emancipation Proclamation and President Lincoln’s General Order 233, to provide equal pay for Black soldiers and equal protection if they were captured by the Confederacy and became prisoners of war.

You can use “Black Soldiers in the Civil War” to teach about the evolving Federal position on emancipation and Black recruitment during the Civil War, segregation and integration of the military, or a history of Civil Rights. Students will learn how the Government tried to appeal to Black soldiers and will consider the importance of enlisting them to the Union’s victory.

Students will learn how news from Fort Sumter and the start of the Civil War in earnest set off a rush by free Black men to enlist in the U.S. military. The Lincoln administration wrestled with the idea of recruiting of Black troops, concerned that it would prompt the border states to secede.

Increasing personnel needs pushed the Government to reconsider, however. Congress passed the Second Confiscation and Militia Act on July 17, 1862, freeing slaves with masters in the Confederate Army. Slavery was abolished in U.S. territories two days later, and on July 22 Lincoln presented the preliminary draft of the Emancipation Proclamation to his Cabinet. After the Union Army turned back Lee’s first invasion of the North at Antietam and the Emancipation Proclamation was announced, Black recruitment was pursued in earnest. 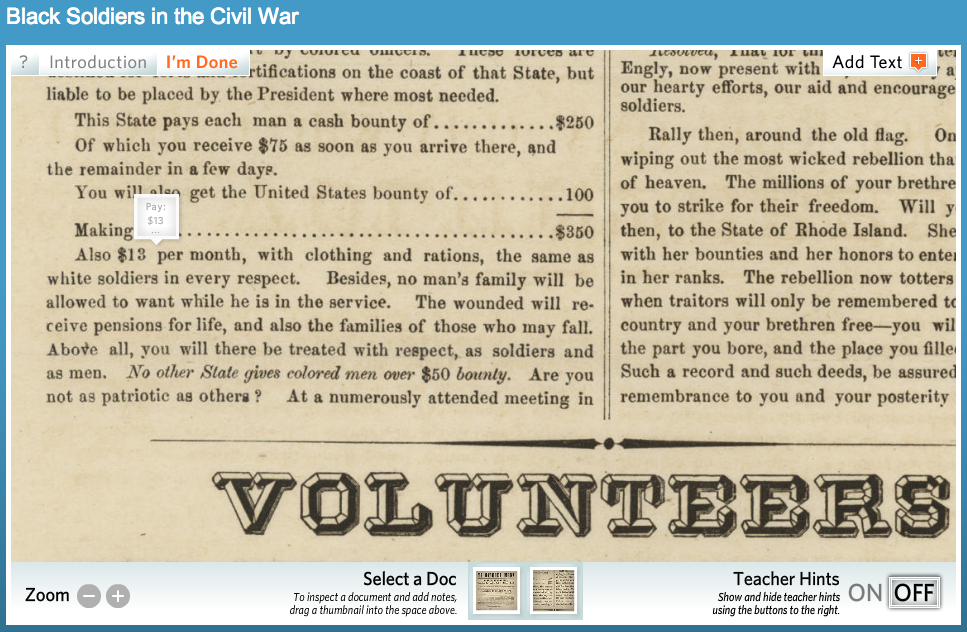 At the conclusion of the activity, students will reflect on Lincoln’s order as well as the methods used to recruit Black soldiers and their importance to the Union victory.

This DocsTeach activity is based on the Teaching With Documents lesson plan “The Fight for Equal Rights: Black Soldiers in the Civil War,” formerly published on www.archives.gov/education and in the National Council for the Social Studies (NCSS) publication Social Education: Freeman, Elsie, Wynell Burroughs Schamel, and Jean West. “The Fight for Equal Rights: A Recruiting Poster for Black Soldiers in the Civil War.” Social Education 56, 2 (February 1992): 118-120.

DocsTeach is made possible in part by the Foundation for the National Archives, with development of the Interpreting Data tool generously supported in part by Texas Instruments.