On August 28, 1963, a quarter million people came to the nation’s capital to petition their duly elected government in a demonstration known as the March on Washington for Jobs and Freedom. Frustrated by the inaction of a gridlocked Congress, the marchers called for Congress to pass the Civil Rights bill.

The size of the event and the potential for violence caused some congressional opponents of the March to try different legislative tactics to block the demonstration. Representative Albert Watson (D-SC) proposed House Concurrent Resolution 186, which called for a cessation of all mass protests while the Civil Rights bill was being considered. 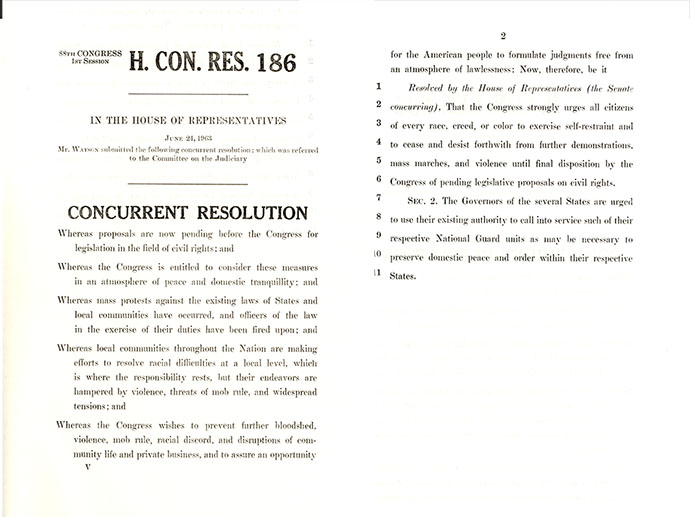 Representative William Tuck (D-VA) introduced H.R. 7329, a bill to amend “the criminal laws of the United States” to prohibit interstate movement “with the intent to incite or to commit any act or engage in any conduct which would tend to incite to riot.” As some already predicted that the March would end with rioting, this law could have been used to stop the March and other demonstrations. Both bills were referred to committees, but Congress took no further action.

Although President John F. Kennedy strongly supported the Civil Rights bill, he hesitated to support the demonstration. He knew that a turbulent March would undermine support for the bill and cast doubt on the nation’s commitment to justice and liberty. In his June 19 message to Congress, he declared that racial strife was “weakening the respect with which the rest of the world regards us.” Kennedy was aware that nations around the world looked to the United States to address its racial problems peacefully and justly­.

In newspapers and congressional debate leading up to the March, opponents in Congress denounced the demonstrators as “unwitting followers” of their “communist” leaders. They argued that the March should be prohibited as an “illegal assembly” and they predicted violence in the streets. Their fears proved to be unfounded, 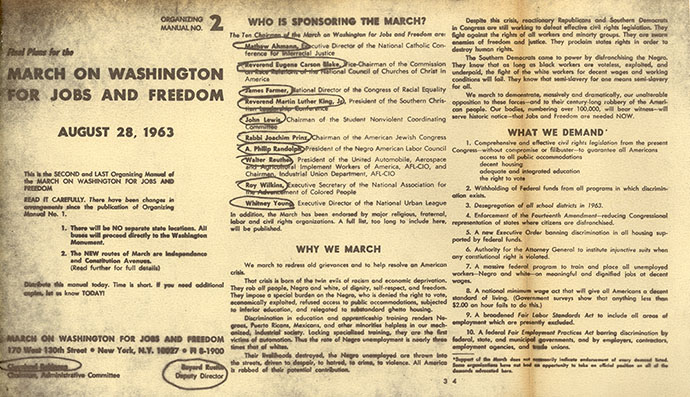 and the March proceeded calmly and peacefully. Many of the addresses were memorable–especially Martin Luther King Jr.’s I Have a Dream speech­–but the truly historic and most emotionally powerful aspect of the March was the demonstrators’ peaceful assembly.

While the March did not immediately change the balance of power in Congress in support of civil rights, it did accomplish two very important things. First, it prompted many Americans to reconsider their perspective on the Civil Rights Movement. Second, it reaffirmed the strength of American liberal institutions. For many Americans, the confirmation that our nation and government institutions were resilient enough to withstand a non-violent mass protest on a deeply divisive issue was reason enough to hope for democracy to prevail.

Visit our featured document for more information and primary sources relating to the congressional perspective of the March on Washington.