This post is dedicated to the memory of Rabindranath Tagore (May 7, 1861 – August 7, 1941). His words are as meaningful in the 21st Century as when he first wrote them.

Federal records and poetry – what could possibly be the connection? How might Rabindranath Tagore—an Indian (Bengali) writer and poet, educator, musician, and visionary—have crossed paths with the Federal Government of the United States?

Tagore being world-renowned improved the likelihood there might be Federal records at the National Archives related to him. Many saw Tagore as a bridge-builder between the East and West, and his world travels, especially several visits to the U.S., suggested there might be a connection. Controversy over his support for an India free from British colonial rule offered another clue. The records of several Government agencies reveal even more about Tagore’s complex relationship with the West, especially the U.S. where he was beloved in some circles and viewed with suspicion by others.

Photographs of Tagore in Paris, circa 1930, are part of a huge collection the United States Information Agency (USIA) acquired from the Paris Bureau of The New York Times. The Prominent Personalities file includes photographs of Tagore (RG 306, National Archives Identifier 2830620).

Tagore’s earliest visit to the U.S. in 1912 followed the first publication of his poetry in Chicago’s literary journal Poetry that year. Six “free verses” of his devotional poetry were translated from his work Gitanjali (The Offering of Songs). Many years later, during the 1961 centenary celebrations of Tagore’s birth, President Kennedy quoted a “majestic verse” from Gitanjali that “might serve as today’s universal prayer.” It was included in a draft copy of his letter to be read at the centenary celebrations in New York City. The letter is preserved in USIA’s India: Action Messages, Tagore file. (RG 306, National Archives Identifier 72053874)

Where knowledge is free

Where the world has not been broken up into fragments

Where words come out from the depth of truth….

During that seven-month visit in 1912, Tagore spent time with his daughter-in-law and son Rathindranath Tagore who was a student at the University of Illinois and an active member of the Urbana Unitarian congregation. Tagore’s regular meetings with local Church members and students, and his famous Harvard lecture series established long-lasting ties with communities in the U.S., where Tagore Societies soon sprung up to study his work.

Finding mention of Tagore in the U.S. Department of the Interior, National Park Service was a surprise. Because of the special relationship between Tagore and the Unitarian Church of Urbana, his interactions with the Church are included in the nomination materials of the Church submitted in 1991 to the National Register of Historic Places (RG 79, National Archives Identifier 28891794). This Church was the first religious center at the University of Illinois to accommodate international students (including Tagore’s son) whose religions were Christian and non-Christian. These attendees became known as the Unity Club. Educators and students in Urbana who drew inspiration from Tagore’s poetry, music, and art, became known as the Tagore Circle.

Between 1912 and 1930, Tagore visited the U.S. five times, traveling from coast to coast and receiving a warm welcome. In 1913, Gitanjali was translated and published in England in its entirety. Being awarded the Nobel Prize in Literature that same year propelled Tagore onto the world stage. He literally became a man of the world, traveling, lecturing, and raising funds for the famous, unconventional educational institution he founded 93 miles from Calcutta, Santiniketan (Abode of Peace). Tagore Visits the United States and Tagore and America are two publications that were prepared for the 1961 centenary celebrations in English, Hindi, and Bengali by U.S. Information Services (USIS) as the local overseas posts of USIA were known. (RG 306, National Archives Identifier File 6087550)

Records created by the War Department, Military Intelligence Division between 1918 and 1947, include biographies of leaders, politicians, and significant people such as Tagore. From the undated, typewritten draft, we learn that the close circle of friends referred to Tagore as “spiritual master,” and Mahatma Gandhi as “great soul….”  Tagore’s “Nobel prize money, his royalties…, and the revenue of his estates were all made gifts to this school [Santiniketan].” (RG 165, National Archives Identifier 3431609)

The publications and multimedia programs created in 1961 for the 100th anniversary of the birth of Tagore provide a glimpse into the depth of his popularity and esteem as well as a perspective on U.S. foreign policy. Private organizations across the U.S., like the Asia Societies, Tagore Societies, and university-affiliated literary groups began planning for the centenary activities two years earlier. Faculty and administrators from universities across the country who were members of The Rabindranath Tagore Centenary Committee in America included American University, Georgetown, Howard, Yale, Harvard University, and the University of Pennsylvania.

During the Cold War, when India was a “non-aligned” country, these centenary activities were embraced by the U.S. Information Agency (USIA) responsible for the public image of the U.S. abroad and the overseas USIS posts. Because of Tagore’s significance to Indians and Pakistanis, the centenary celebrations became fair game for the U.S. to compete with the Communist bloc for “psychological leadership.” The file, India: Action Messages, Tagore can be found in the records of the Department of State (RG 59, National Archives Identifier File 72053874). 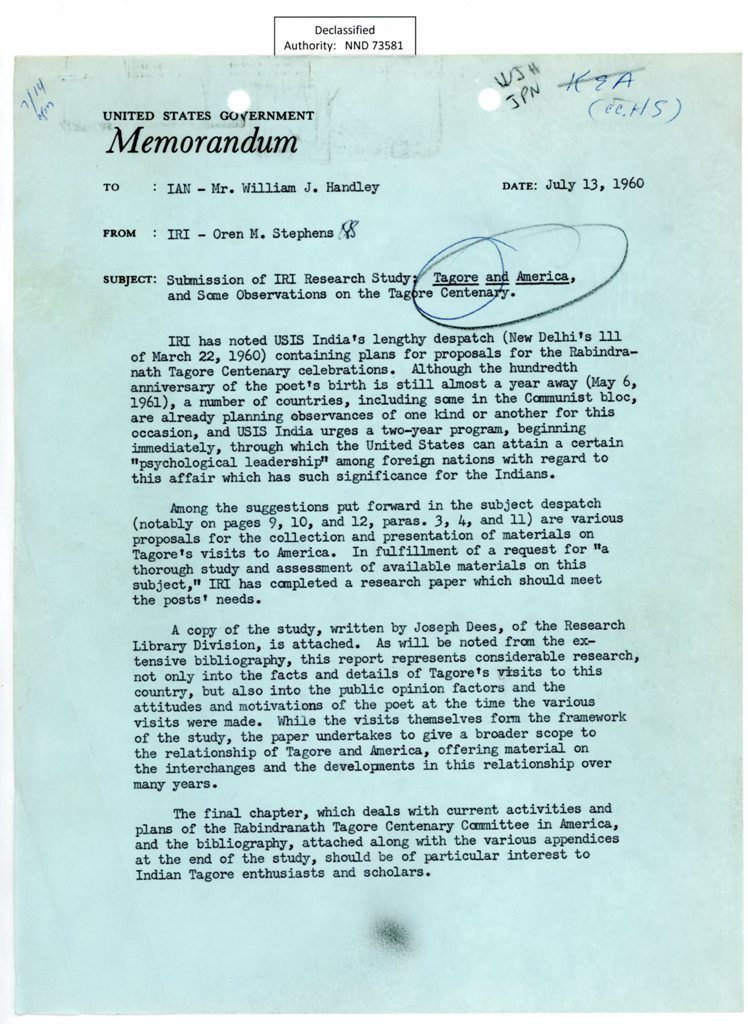 Two days of a week-long program commemorating the memory of Tagore sponsored by the Asia Society of New York were recorded by Voice of America (VOA) for distribution overseas. “Robert Frost on Tagore” is part of a treasure trove of VOA audio recordings housed at the National Archives at College Park. (RG 306, National Archives Identifier 122176; 306-EN-J-T-3601) John D. Rockefeller, III, opened the large public meeting by reading letters from Prime Minister Nehru and President Kennedy. Robert Frost then speaks informally, with a sense of humor and deep appreciation for Tagore’s work.

Even during World War I, politics and international intrigue enveloped Tagore when his name became associated with the Hindu-German Conspiracy trials in San Francisco. The British Secret Service uncovered plots in the U.S. by Germans and Indian Nationalists conspiring against British rule in India, which were in violation of the U.S. neutrality laws. National newspapers reported in early 1918 that secret papers purported to show Tagore enlisted the help of Japanese statesmen in establishing an independent India and the plot implicated such luminaries as Tagore.

A handwritten letter and cablegram from Tagore to President Wilson in early May 1918 are preserved in the records of the Department of State. (RG 59, National Archives Identifier File 83577575) Tagore calls for protection against the prosecution counsel’s “lying calumny.” He explains his thinking on patriotism and honesty and assures the President that the hospitality he received in the U.S. “was not bestowed upon one who was ready to accept it while wallowing in the subsoil sewerage of treason.” A letter from the Department of Justice to the Department of State in August 1918, ends with, “When Preston [the prosecution counsel] was on here he told me that Tagore was not in any way implicated in the plot….”

Cablegram from Tagore to President Wilson, and the Department of Justice’s letter to the State Department about the situation (RG 59, National Archives Identifier 83832589)

During World War II, when Paris fell in June 1940, Tagore sent a telegram to President Franklin D. Roosevelt, the handwritten draft of which was published in Tagore and America (RG 306, National Archives Identifier File 6087550). It is a plea to the President and the United States.

Today, we stand in awe before the fearfully destructive force that has so suddenly swept the world. Every moment I deplore the smallness of our means and the feebleness of our voice in India so utterly inadequate to stem in the least, the tide of evil that has menaced the permanence of civilization.

All our individual problems of politics to-day have merged into one supreme world politics which, I believe, is seeking the help of the United States of America as the last refuge of the spiritual man, and these few lines of mine merely convey my hope, even if unnecessary, that she will not fail in her mission to stand against this universal disaster that appears so imminent.

In 1944, Eleanor Roosevelt mentioned Tagore’s writings in her “My Day” column (available through the Eleanor Roosevelt Papers Project at The George Washington University, in partnership with the National Archives). “My Day” was a daily column, written in an informal style beginning in 1935, that appeared in approximately 90 newspapers throughout the country. She wrote:

A young woman from India came to see me yesterday, a niece of Tagore, the Indian philosopher and poet. I have always loved his writings and therefore I felt it a privilege to see this young woman, who lived so closely to him in her early youth.

In 2011, the 150th anniversary of Tagore’s birth was marked by the publication of The Essential Tagore, the largest anthology of his work available in English. It was a collaboration between Harvard University Press and Visva-Bharati University.

Many thanks to Netisha Currie, Billy Wade, and Carol Swain for their technical assistance with the records.