Congress Creates the Bill of Rights, our new mobile app for iPads, is an interactive learning tool that allows students to explore the proposals, debates, and revisions that shaped the Bill of Rights. In addition to the app, we’ve also created a series of activities to analyze the app in your classroom. 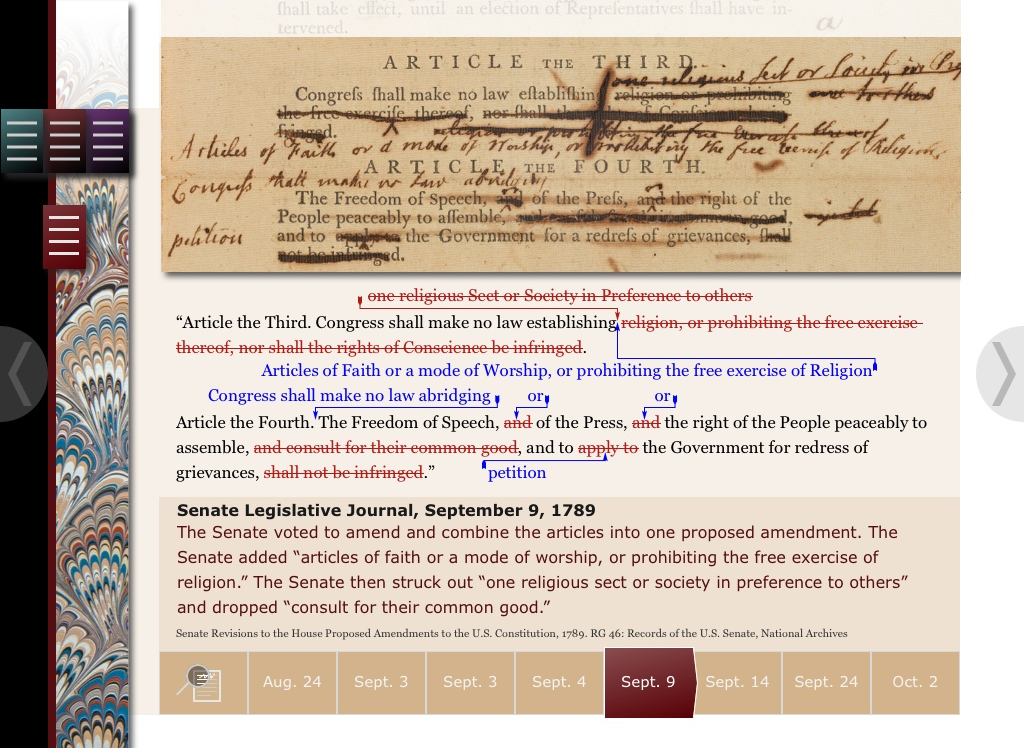 By using our app and accompanying activities, students will study the featured document, Senate Revisions to the House Proposed Amendments to the U.S. Constitution, and go inside the First Congress as Madison and the leaders of rival political factions worked in the House and Senate to formulate amendments to change the recently ratified Constitution.

Divide the class into small groups. Each group will analyze the featured document using the app or facsimile, Worksheet 1, and Worksheet 2. After the members of each group have completed the worksheets, each group will discuss the following questions:

When each group has finished sharing and discussing, each group will select a spokesperson to share the group’s results with the class.

Divide the class into small groups. Use Worksheet 3 to analyze one issue from the Issues and Positions feature of the app.

Divide the class into small groups or have them work individually. Use Worksheet 4 to analyze the First Amendment (House Proposed Articles Three and Four) at each step of its revision in Congress as detailed in the Close Up on Compromise feature of the app. When the students complete the worksheet direct the class to compare and contrast the versions of the proposed amendment at each date reflected.

Divide the class into small groups or have them work individually. Assign each group an amendment as detailed in the Amendments in Process feature of the app. Use Worksheet 5 to analyze each assigned amendment. Use Worksheet 6 to detail whether the proposed idea changed or stayed the same at each step of its progress. (Attach additional pages as needed.) Use Worksheet 7 to reflect on how Congress changed the amendment from its proposal to its final condition.

These questions provide an opportunity to reflect on four important historical issues about the First Congress and the Bill of Rights. They can be considered before or after exploring the app, and they can be addressed individually or in a group discussion.

Many feel that without James Madison’s leadership there would have been no Bill of Rights. At the same time, the Bill of Rights that was created was not exactly what Madison had originally proposed.

Following the suggestion of Roger Sherman, Congress decided to attach the Bill of Rights to the end of the Constitution rather than accepting James Madison’s approach to change the text of the document itself.

Creating the Bill of Rights was one of the early accomplishments that demonstrated that the First Congress could serve as a forum to resolve important national issues.

See this lesson online for more information on using it in your classroom.

One thought on “Congress Creates the Bill of Rights: iPad App and Educational Resource”