Today’s post comes from Marissa Friedman, intern at Historypin. Historypin teamed up with the National Archives to develop the Remembering WWI app. You can learn more about the national collaborative Remembering WWI project on archives.gov. 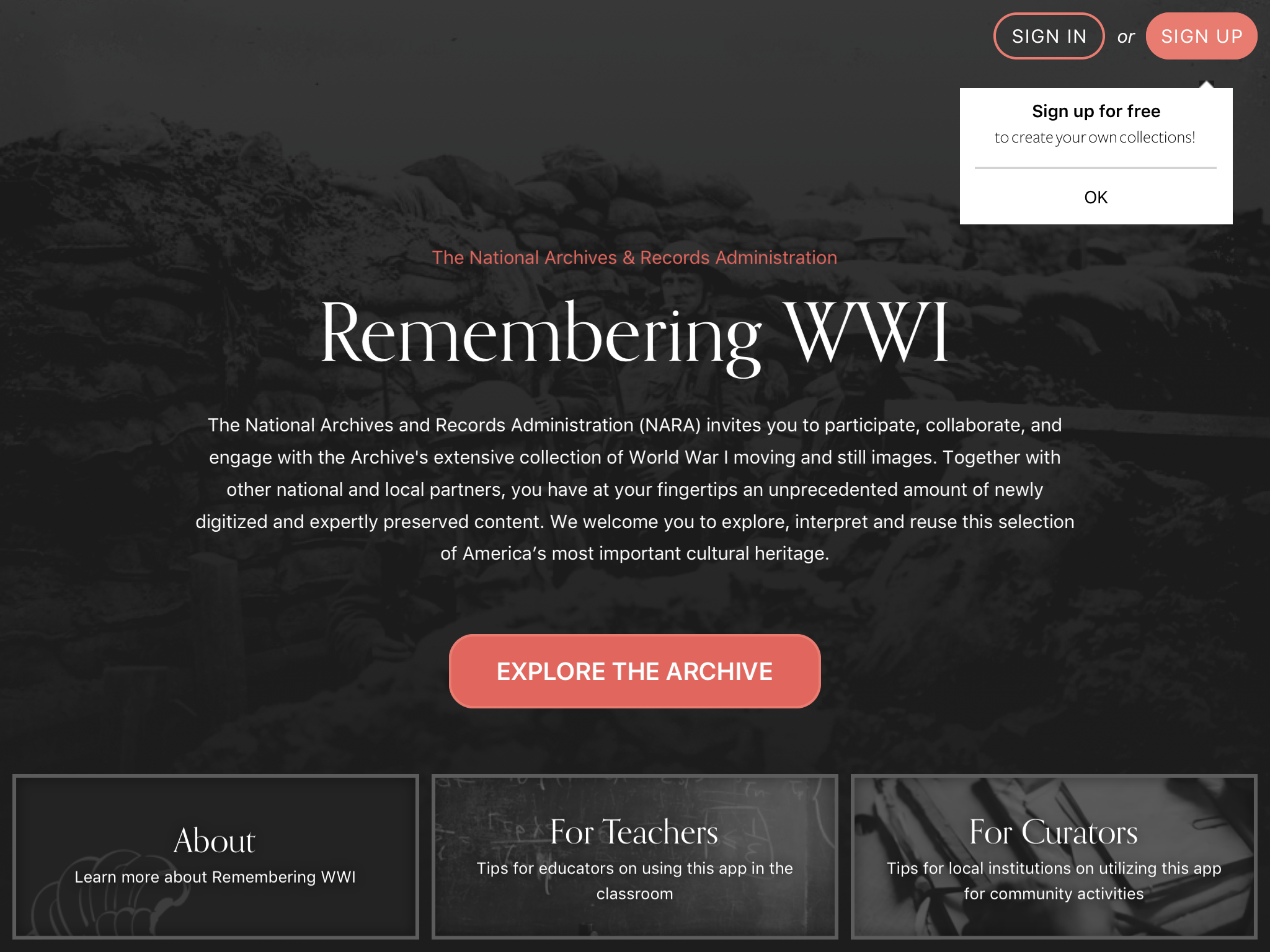 For the past eleven months, I have scoured digitized collections of World War I materials from the holdings of the National Archives, looking for the most compelling, significant, and relevant stories to share with the public through the new Remembering WWI tablet app and Historypin’s companion digital platform.

In examining the diverse experiences of Americans on the home front during the war, I’ve had more than my fair share of “wow” moments of discovery. From profoundly moving, to immediately thought-provoking, these WWI materials are full of amazing and sometimes forgotten stories just waiting to be found. Here are a few of my favorite stories I’ve discovered so far:

The Pigeons of Valor collection provides film clips detailing the U.S. Signal Corps pigeon training activities and facilities during the war. World War I is often characterized as the first “modern” war, due in part to rapid wartime advancements made in weaponry, medicine, and camera and film technology. National Archives collections on pigeon training serve as a great reminder to the limits of these technological innovations, as both sides often relied on pigeons for crucial and speedy communications.

The best part of all? The collection includes film of the commendation ceremony in which pigeons who served honorably during the war received medals! You know you’ve always wanted to see pigeons getting medals.

The war instigated sweeping changes in American society in terms of gender and gender roles. Women entered the workforce in record numbers to fill the places of men sent to the front lines, and became literally indispensable to the country’s wartime economy. They found newly accessible occupations in formerly male-dominated fields, especially in industry–they mass produced guns, cars, engines, parachutes, planes, munitions, fabrics, and soaps, large amounts of foodstuffs for the front lines, and so much more. Empowered and employed, women remained pivotal producers and makers on the home front and were involved in labor activism during WWI.

The woman brandishing a blowtorch while on the lines in the Packard Motor Car Company factory in Detroit Michigan exudes such a sense of “cool” that I had to highlight this photo from the Women in WWI collection:

Wartime opportunities for female employment also bolstered the growing suffrage movement and went hand-in-hand with women’s prominent roles as activists, reformers, union organizers, pacifists, and political dissidents. They fought for women’s rights (including suffrage), union rights and labor protections, pacifism and an end to war, social justice, socialism, or simply access to cheaper food for their families. Women demonstrated and marched in the streets, petitioned, gave speeches, organized the day-to-day activities of activist organizations, and produced pamphlets and other forms of mass media.

Over five thousand women from Harlem and the East Side descended upon City Hall in 1917 to protest the draft, as pictured below in this photo from the Keeping Peace: Pacifist Activity on the Home Front collection. It is powerful to see a protest of such scale with women engaged in collective political action, and testifies to the pivotal role such women played in the civic fabric of the nation during the war.

5,000 women in City Hall, New York, registry riot. Policemen clearing City Hall Park after five thousand women from the East Side and Harlem had gathered to petition the Mayor against the draft. When they learned the Mayor was not in his office they refused to leave. A number of policemen were slightly injured in the riot that followed. 165-ww-165A-026

The government used wartime necessity to justify the intensive surveillance of political dissidents (such as socialists, anarchists, and conscientious objectors) and those “alien enemies,” including German-born U.S. residents, spies, and those judged to be sympathetic to the enemy cause. The linking of anti-immigrant sentiments with wartime justifications for repression is a phenomenon not unfamiliar today.

The Alien Property Unit, given broad discretionary powers, seized around 25 million dollars worth of immigrants’ property during the war. Alien enemies were required to hand over their weapons to police, were fingerprinted and given special identification cards. Many enemy aliens and political “subversives” were interned or imprisoned, often without much evidence.

To top it all off, enthusiastic citizens actively participated in these anti-German surveillance campaigns on the local level. The photograph below, taken from the Under Surveillance: Enemies and Aliens collection, illustrates a famous example of citizen surveillance which occurred in at the shoe shop of C.B. Schoberg in Kentucky. The Citizens’ Patriotic League suspected Schoberg of pro-German sympathies, and he became the subject of an elaborate surveillance scheme involving a dictaphone hidden in his shop by League detectives. In a contemporary world, in which the costs and benefits of security and surveillance are similarly being negotiated, I found this photo and the story behind it particularly striking.

How sedition is ferreted out in Kentucky. A dictaphone was placed in the shoe shop of C.B. Schoberg, shown here (under pretense of men hunting electric light leak) under auspices of Citizens’ Patriotic League. The listening end was located in the 1st. National Bank of Latonia next door, whose officers were aiding the League. Detectives listening in gathered pro-German evidence and arrested Henry Feltman, a wealthy tobacco merchant; J.H. Kruse, a wealthy brewer; and two others. The Court of Inquiry for Kenton County sent the case to the Federal Grand Jury to try in August 1918. 165-ww-165A-041

One of the most moving stories I found is the film footage from the Veteran Activists: The Bonus Army Protests of 1932 collection. WWI veterans sought early payment in 1932 for the bonuses they had been promised for their service in the First World War, to be delivered in 1945. In the face of financial ruin precipitated by the Great Depression, veteran activists processed from Oregon to the nation’s capitol in Washington, D.C., growing in numbers along the way, to demand their bonuses.

Thousands of veterans lived in well-ordered squatter camps in nonviolent protest for months while Congress refused to meet their demands; the resulting stand-off came to a head when President Hoover called in the Army to keep the protesters from disturbing government operations. General Douglas MacArthur gave the command to burn the shanties and run the Bonus Army off their makeshift camp.

Footage of soldiers and police dragging veterans out of abandoned buildings, tanks and soldiers marching down the street, soldiers lobbing tear gas, wearing gas masks, and setting the camps on fire gave me chills. This is a story that needs to be told, and I can’t believe that I had never heard of the Bonus Army protests until I stumbled upon this footage. Here is a newsreel clip highlighting media coverage of the events:

The war effort became integrated into the daily fabric of life for even the youngest Americans, despite the fact that no blood was shed on American soil. I was surprised by the number of photos in National Archives collections devoted to children’s activities on the home front. Children of all ages became active participants in the war effort, raising money for various wartime campaigns, making toys for refugee children abroad, and marching in parades. High school children received school credit to make gas masks in class (imagine making gas masks in school!).

Even young children could help gather the supplies necessary to make these and other wartime equipment–the photo below from the Children’s Activities in WWI collection shows very young Japanese boys in California gathering pits for making gas masks! Could these children grasp the magnitude of the war of which they were somehow a part?

You can get involved!

These are just a few of the interesting themes and stories that you can explore in Remembering WWI. This project is a work in progress, and here’s how you can help:

3. Are there thematic tags that you feel are missing from these photographs? If you were cataloging these materials, how would you categorize them? Add your own tags!

This post originally appeared on our sister blog, The Unwritten Record. The Remembering WWI project is made possible in part by an anonymous donor and the National Archives Foundation.